Made another thread on the history of khanda... you are making psuedo connections to make a false point 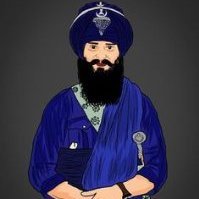 We cannot allow Suchi's thread and replies. His posts are now restricted.